Model Overview
Toyota's 2011 Camry is available in many different trim levels, ranging from basic to luxurious, with either an inline-4 or a V6 to deliver power. The 2.5L 4-cylinder generates 169 horsepower (179 in sport SE trim), and it is mated either to a 6-speed manual or 6-speed automatic. The 3.5L V6 develops 268 horsepower and 248 ft-lb of torque and is paired with a 6-speed automatic transmission. Both engines feature Toyota's variable valve timing with intelligence (VVT-i) system, which helps optimize power and efficiency through the entire operating range.
The Camry Hybrid pairs a 147-horsepower Atkinson-cycle 2.4L inline-4 gasoline engine with a 40-horsepower electric motor system--together producing a combined 187 horsepower--which places the Hybrid above the standard Camry 4-cylinder in terms of power. This muscle is delivered to the front wheels through a continuously variable transmission (CVT). The Hybrid also includes an "ECO" button that limits the power drawn by the climate control system and slightly increases fuel economy.

Besides the Hybrid, Camrys come in four different trim levels, including the economical CE, mid-range LE, lavishly equipped XLE and sporty SE. The CE is only available with the 4-cylinder, while the LE, XLE and SE can be had with either engine. CE standard equipment includes air conditioning, cruise control, a 6-speaker AM/FM/CD sound system and power windows, locks and mirrors. The LE adds more features like a power driver's seat and remote keyless entry. XLE trim includes a long list of upgrades such as dual-zone climate control, a 440-watt, 8-speaker JBL sound system with 6-disc changer and Bluetooth compatibility, a power moonroof, reclining rear seats, aluminum wheels and fog lamps.

The sportier SE model adds a blackout grille, 17-inch alloy wheels and a sport suspension with lower ride height to the LE's equipment.

All Camrys get a multi-function display that includes trip-computer functions such as average fuel consumption, and the Hybrid model adds information about the powertrain's performance.

Standalone options available on the CE include 16- or 18-inch alloy wheels and a rear spoiler. On the LE, 16-inch alloy wheels, a JBL stereo with Bluetooth, and moonroof can be added. The performance-minded SE's options list includes packages with an auto-dimming rearview mirror and a universal garage door opener, heated seats and mirrors and a navigation system. At the top of the lineup, the XLE's options include the navigation system, heated seats and the Smart Key system. In short, there's a Camry out there for nearly any driver.

The option list for the Hybrid includes packages that add a leather-wrapped steering wheel and shift knob, a JBL audio system with a 6-disc CD changer, an auto-dimming rearview mirror with compass, and Bluetooth. Also available is a leather seating package, a moonroof, and a navigation system. The Convenience Package adds heated seats and mirrors. 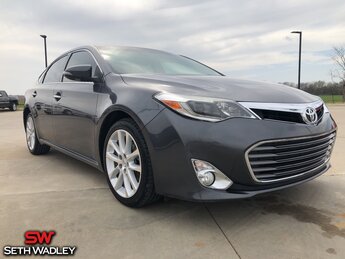 2018 Toyota Tundra Limited
Gray
* Pricing - All vehicle pricing shown is assumed to be correct and accurate. Incentives, credit restrictions, qualifying programs, residency, and fees may raise, lower, or otherwise augment monthly payments. Additionally, incentives offered by the manufacturer are subject to change and may fluctuate or differ based on region and other considerations. Unless otherwise noted or specified, pricing shown does not include title, registration, or tax fees and costs.

* MPG - Vehicle information, as well as features and other inclusions, may vary by model and are based exclusively on standard equipment. No claims, warranties, or guarantees have been made related to the accuracy of customer payments, model equipment, or vehicle pricing. Please call with any questions you might have and to reassert the accuracy of any information presented here.
Close
Save
Close
Close
© 2021 Seth Wadley Auto Group | Privacy Policy
Much from Remora
Send Now
Close
Share Search Results